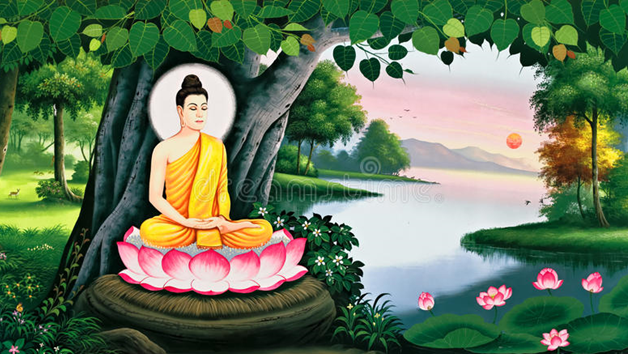 The Story compiled and written by Dr. Vic Bradford

The person known as the Buddha was one of the most remarkable humans in history.  By using a well-cultivated intellect, character, and observations, he was able to achieve a remarkable insight into the nature of reality, to overcome the effects of chronic suffering, and to demonstrate the benefits of the compassion which is at the very center of our universal heritage. His teachings do not depend on a “secret or hidden message” but are instead open to all people from any background, faith tradition, or cultural heritage.

The early life of the Buddha is based on legend (although his later life and teachings are based on better evidence). According to legend, he was born into a royal family in ancient India, received the education of a prince, and lived a luxurious life. During his early adulthood, however, he came to understand that all humans – including kings and queens — are subject to suffering, sickness, old age, and death.  Successfully overcoming them became an obsession for him. He realized a life of luxury and power could not address them, so he left his palace and took up the life of a wandering mendicant. After years of training, he understood he would need to apply his own mind and heart to the problem. After an epic struggle with the demon Mara (“the Tempter,” who might have been a manifestation of the Buddha’s subconscious mind), he achieved a breakthrough understanding called Enlightenment, during meditation.

He decided to share his knowledge with others, and he taught for forty years. His teachings emphasized equanimity, balance, compassion, non-attachment, responsibility, and acknowledgment of impermanence (especially for one’s own psyche). Many humans have appreciated, interpreted, and validated his message over the past twenty-five centuries. Some of his main teachings are listed below. As do all beings, the Buddha eventually passed away, but not before establishing a teaching which has affirmed the presence of a basic goodness in our existence.

For a more complete story of the Buddha, see The Life of Siddhartha Gautama who Became The Buddha